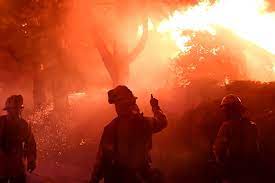 Mr Leo Autelitano, President, Aspromonte National Park in southern Italy, says only one firefighting aircraft has so far been deployed to fight forest fires,  raging at the park.

This, he said, was in spite of repeated appeals for assistance.

A map produced by the EU’s Copernicus Emergency Management System showed several fires within the boundaries of the park.

Numerous wildfires were still blazing elsewhere in Italy too as a heatwave brought temperatures of up to 45 degrees Celsius to some places, while hot winds continued to spread the flames.

In Sicily and Sardinia, the Civil Protection Department predicted an increased fire risk for large parts of both islands.

There, fires had caused considerable damage to farmlands, especially in the western part of the island. (dpa/NAN)

Dino Melaye Speaks On Hushpuppi Laundering Money For Him

Nnamdi Kanu Has No Link To EndSARS – Reno Fires FG

Igbo’s no longer safe in Nigeria, allow them go – Ohaneze